I woke up this morning to brilliant sunshine streaming through the windows. We had already decided that today was to be a day of doing very little so that I could stay off my feet and rest them. My ankles have not been too good just lately and I wanted them in good condition for the nature workshop I am doing tomorrow at Zealandia. But the sun was shining and I so wanted to be out with my big lens on such a perfect day!
So I came up with the idea of taking my new camping chair to the Petone Estuary and sitting with my camera.  I wasn’t going to go looking for birds; I was just going to wait for them to come to me. Best idea I have had in a long time! The tide had turned and was on its way out, but there was still a lot of water about and very few birds. So I sat and watched. Within minutes I saw what I can only describe as a duck train! Mother duck and a train of ducklings following close behind – very cute.

The gulls were the first to arrive as the tide receded, I noted several different species of gulls, both red billed and black billed gulls were fishing side by side. Next came the Caspian Tern. It landed on the start of the sand bar and waited. It was still waiting an hour later when the water was almost totally gone. I was starting to make up stories for it – I could imagine it had said to a fellow tern “meet you at the sand bar”, and it had been stood up. Another hour waiting and it finally decided to have a fly about, but having found no other terns, went back to waiting. I felt sorry for the lonely tern.

Next to arrive at the Estuary was the oyster catchers. I have never really watched them before but one by one they all carried out the same little routine. Fly in and land, then take a bath. Meticulous care was taken on the wing feathers before splashing about one more time, then getting on to feeding themselves. It was almost like they just had to be looking their best for the camera.
The grey heron put in an appearance next. It wandered up and down the beach in front of me, stirring up the water with one foot them diving its head into the water to grab any unsuspecting crab that showed itself.  I didn’t spend too much time watching the grey heron as it wasn’t doing anything unusual and you can have only so many heron photos.
Next up came the swans! This was indeed a surprise for me as I have never seen the swans here before. I knew they were there from time to time but never when I personally have been there. Four of them casually swam in feeding along the way on the weeds in the water. They stayed for a bit then left just as gracefully as they arrived.
The last of the birds to arrive was the starlings. LOTS of starlings. They strutted around amongst the oyster catchers, often getting squawked at for getting too close. The sun showed off their stunning colours as they pecked about on the sand bar. 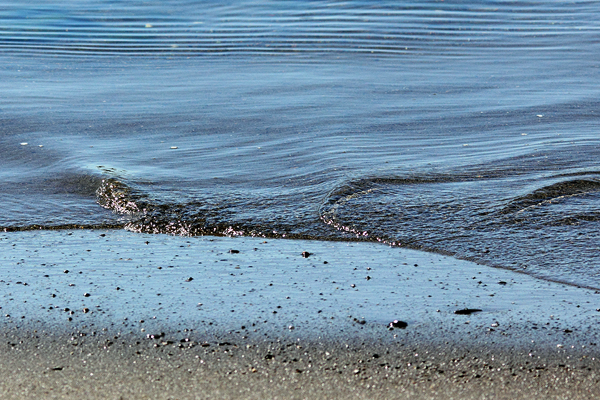 One of the birds that I really wanted to catch in flight was the kingfishers. Today I saw one pair in the distance flitting about but none where I was sitting. I had purposely sat where I knew the kingfishers usually were but they chose today of all days to go elsewhere. Never mind, there is a lot of summer to come for me to catch up with the kingfishers again.