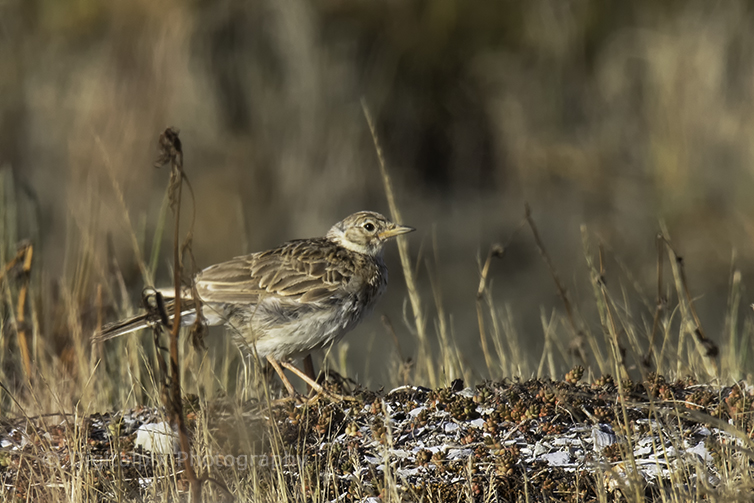 The Miranda Shorebird Centre was next on our list of places to go and was the first part of the return journey home.  Having travelled to Whangarei up the West coast via New Plymouth, we opted to come home down the East coast taking in Thames, Coromandel and Hawkes Bay. 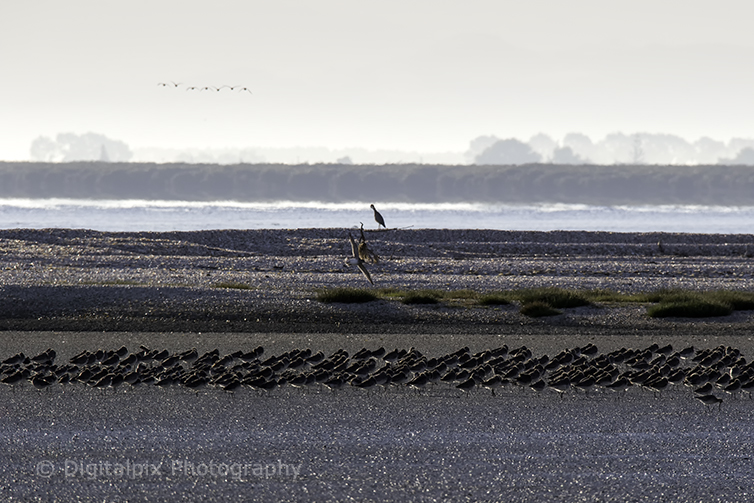 When we arrived at Miranda of course the tide was completely out and so were the birds.  It was a little disappointing knowing that our time there was limited, so we headed down to the Shorebird Centre to find out when the tide would be optimal.  We were greeted with friendly faces and told of the times that would be good to view the birds which was very helpful. 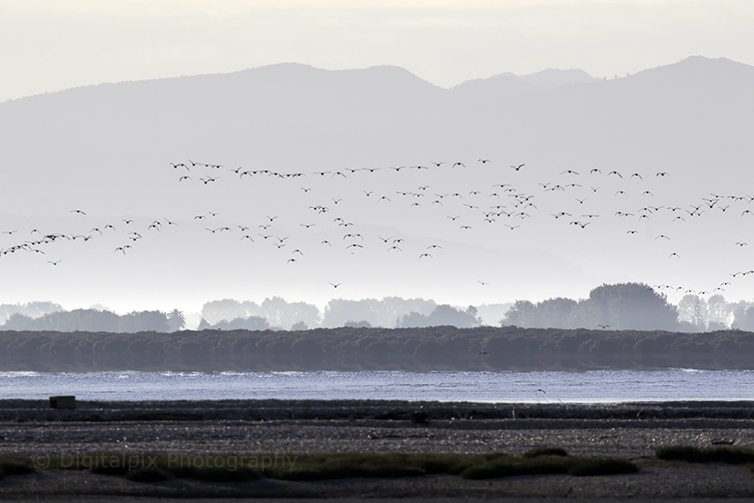 We were also warned that we should leave the car empty of everything as there had been some break-ins in the car park and a couple of photographers had lost a large amount of gear the previous evening.  It wasn’t until we got back to the motel and I checked my messages that I realised the two photographers were friends of mine.  I am really gutted for them, they had no insurance and so much taken.  I believe they went home, fixed the car and then carried on with their trip regardless. 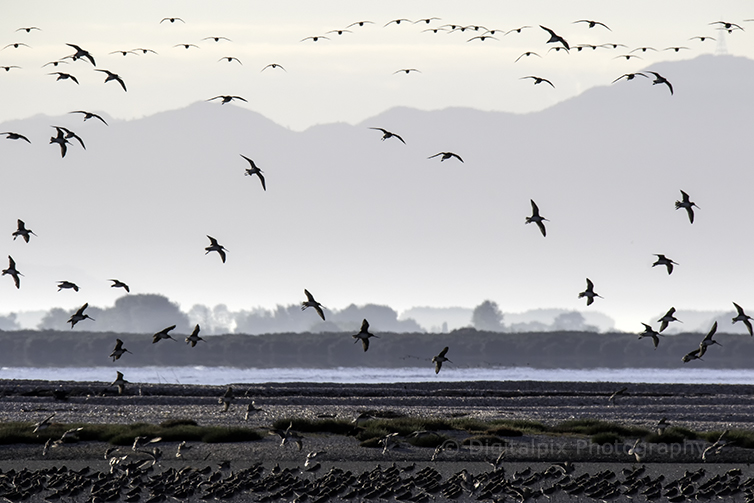 The godwits were my main focus of this visit there were very few to be seen when I arrived the next morning (at the correct tide), however it wasn’t long before they started to fly in a few at a time. Numbers were increasing steadily and every now and then another flock of them would fly in. 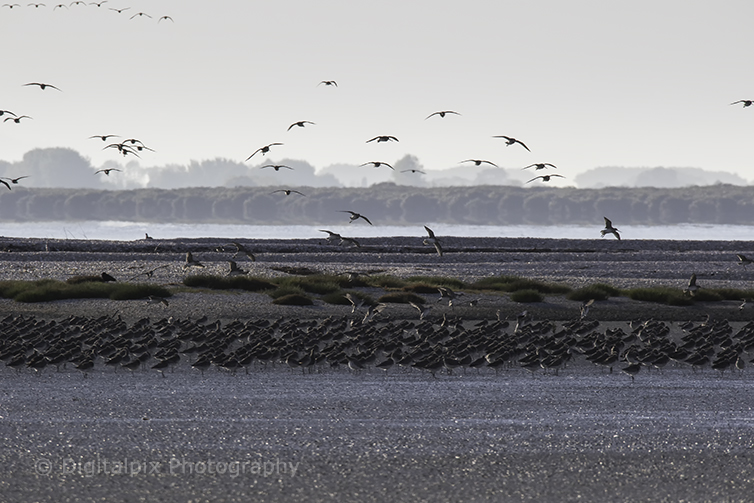 I spent a bit of time looking around while I was waiting and noticed the skylarks singing. One was hopping along the ground just in front of me.  I liked the colours of the dried grasses around and the muted background. So ignored the godwits for a while and concentrated on the skylark. Next minute – there were birds everywhere!  Too many for my lens to capture but it was an awesome sight. 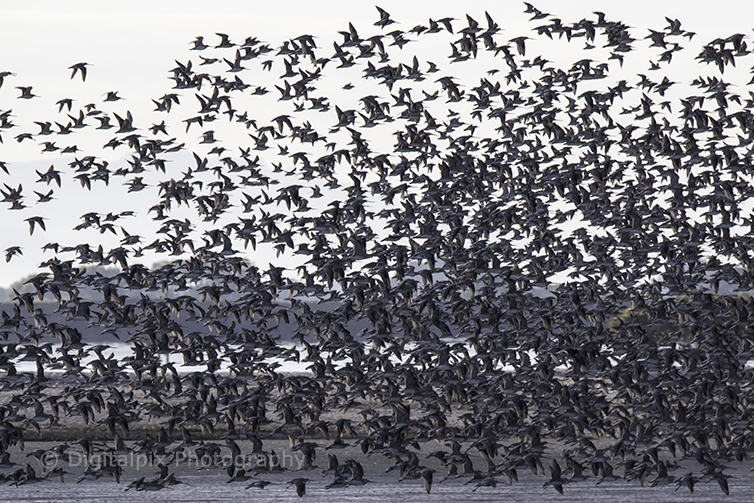 I also watched a white-faced heron stand and survey the area.  It was up on a mound that looked like a fine place to get a good view of the beach and it stood there for quite some time before flying off.  I have hundred’s of white-faced heron images on my computer already but I couldn’t resist this one as it looked so regal. 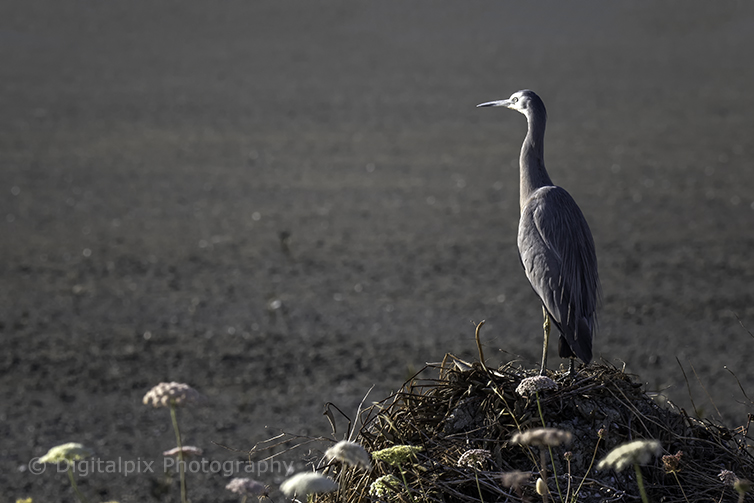 By the time we were ready to leave the tide had come right in close (it didn’t the night before) and while the morning light wasn’t the best I managed to get some reasonably close shots of the bar-tailed godwits.  We didn’t have time to come back again as we were moving around to Coromandel the next day – that will be the topic of another post. 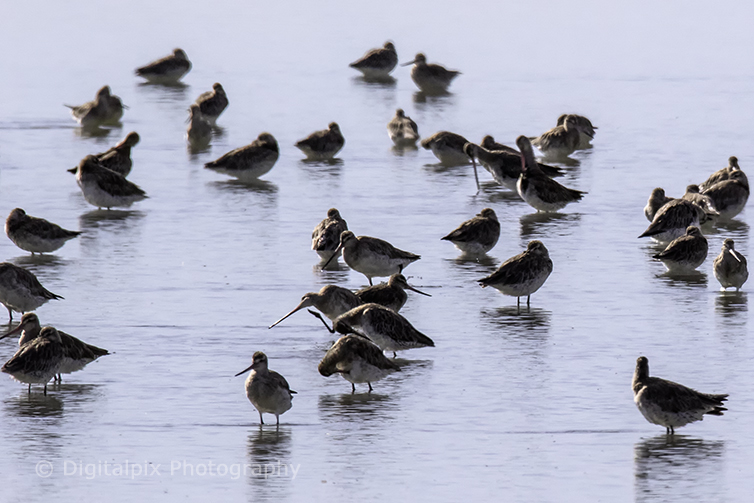 I would definitely recommend allowing yourself more than two days at Miranda if you go there, you are reliant on tides to view the birds at their best.  There is so much we didn’t get to see because of our timing and when the tides were.  Something else to check before planning the next trip too.